The Sword and Shield of Rolling Hill 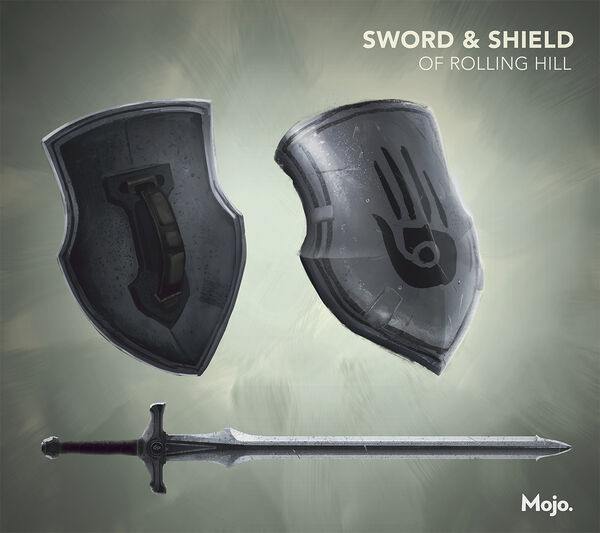 The Sword and Shield of Rolling Hill.

In the past, Aderyn’s realm bordered that of Nitima. The passions of the Nitimaens are easily stirred, and for a time the looked to the lands of Aderyn, which had a rich harvest, while their own was poor, and a fresh war of jealousy began with each reaping. For years, the Aderian border towns would muster their forces to fend off the invaders, until the conflict drew the direct attention of Nitima itself (Ed note: Nitima is agender). A force of unprecedented size struck out at the border lands.
The Battle of Rolling Hill was one of the most pivotal of the war, and without winning that day it is possible the Aderian army would have been defeated in the conflict as a whole. They very nearly lost the day, but for the actions of one woman, seemingly unremarkable solider, who turned the tide at Rolling Hill and possibly the course of the entire war. Armed only with the plain sword and shield she had been issued, and wearing only the most basic armor, she found a small break in the storm of metal and wood, and seized a chance. She singlehandedly slew a line of spearmen after exploiting a hole in the Nitimaen lines, and than made straight for the commander of their forces. She cut down a path of warriors, defeating any who challenged her directly and turning dozens of glancing blows along the way. She personally unhorsed the Nitimaen general, slaying the color guard. The Aderians were almost as shocked as the Nitimaens at what had happened, but as a whole they rallied at the sight of the enemy standards falling at the top of Rolling Hill, and forced their way to the summit themselves. Frightened and leaderless, the Nitimeans were routed. Shortly thereafter the Anderians went on the offensive, eventually claiming some new lands for Aderyn.
But what of that brave woman? At the top of Rolling Hill, there was no sign of her, save for the notched sword of an Aderian solider, and a well used shield with Aderyn’s hand upon it. None know what truly happened to that brave warrior, but the Sword and Shield of Rolling Hill are now considered sacred, a symbol of the control of one’s own destiny so important to Aderyn’s people. 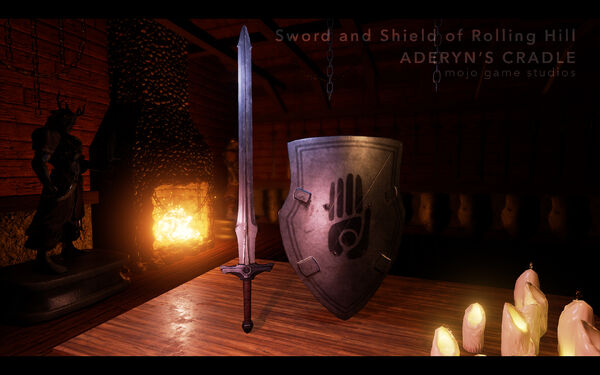 The Sword and Shield of Rolling Hill brought to life in-game.
Retrieved from "https://aderynscradle.gamepedia.com/The_Sword_and_Shield_of_Rolling_Hill?oldid=1355"
Category: