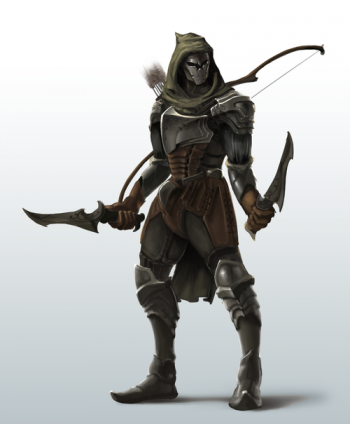 In Aderyn's Cradle your skills will determine which areas you can access, but exploration will help you even the odds. In addition to new weapons, the Cradle is also home to Augments, which are ancient Aderian tapestries and garments containing a small amount of Aderyn’s power. By taking the hidden Augment and imbuing it with the essence of one of the five forces of the world you can give your favorite weapon a series of powerful upgrades.

Questing in Aderyn's Cradle is not about crossing off items on a to do list, but embarking on a journey to discover lost secrets or overcome momentous odds. Rather than having a “quest log”, in Cradle you have a journal of information that keeps track of your progress on your various adventures.

Your main quest, to save yourself from the Wrath of Ostia and restore Aderyn’s lost lands, is only part of your adventure in Cradle. Additional quests are given by the guides or survivors of the Soulfire Crisis, acting as calls to action, not tasks on a to do list. Furthermore, for many “quests” in Aderyn's Cradle, the quest giver will be the world itself or items discovered rather than an NPC. From treasure maps and diagrams of catacombs long forgotten, to lost scrolls detailing battles from a time past, Cradle gives the player vital clues about the world, and leaves it up to them to explore and solve mysteries. In Cradle, you’ll never have to collect 15 boar skins or kill 25 beetles. This is an adventure for you to discover and explore, not a list of chores.

Imagine coming to an old library at the heart of the Bayou. As you explore the recesses of that forgotten place, you come across a scroll that tells of a great weaponsmith who lived high in the cliffs of the Quarry, with a clue as to the location of his forge. The description of the location along with its context is then recorded in your Journal, for you to refer to in the future. Sometime later you may journey to this place, and discover that this smith had once forged a weapon of great power, specific to your class, located somewhere in the lowlands of the Quarry.

Armor augments are the deciding factor between life and death. As skilled as a warrior may be, no one is invincible.

Choosing how to augment your armor, in addition to what new effects and perks this augment will give is what gives each player their own style and flair. Each new augment enhances the armor you already have, both visually and through its ability to protect the wearer. The visual component of each augment is dependent on which perks and stats you as the player will allocate into, to truly specialize your class to fit your unique fighting style.

Armor augments are among the prizes earned from exploration of the world, revealed through solving puzzles, killing powerful enemies, and finding materials with which the player can physically forge the augments onto their armor.

Maintaining your health and stamina in Aderyn's Cradle will require exploration. You will need to forage for plants and herbs to make life saving salves. Discovering combinations of ingredients and finding the right recipes is the key to survival. Regenerate your health in the heat of battle, or create poultices to permanently enhance your resilience. Learning your environment will save your life. The Druid gathers a mushroom, soon to be crafted into a healing salve.

The Druid gathers a mushroom, soon to be crafted into a healing salve.

In Aderyn's Cradle, mana is not just a bar that refills over time or when you chug a potion. It’s a direct connection between you and the environment. As the physical manifestation of the damage done to Aderyn’s realm through its removal from Anora, mana is a powerful resource. Harnessing this energy enhances your defensive and offensive capabilities, but only if you can tap into the magical corruption of the world around you.

Mana is the fuel used to power your weapons and take your fighting to the next level. Collected in crystalline form as it bleeds from the land, the player frequently will use the power of the 5 forces of the world harnessed through the mana they collect to bring them new and mystical effects. Mana is stored in sacred crystals that can be upgraded in capacity the more that mana is used. Whether used to imbue your weapon with a mighty augment, or as the fuel to power these upgrades, managing your mana is critical to success.

From the highest peaks, to the deepest recesses of the world, players will find themselves in a different kind of combat. Not all opponents can be defeated with steel and skill, some must be fought with keen observation and deep thought. Many secrets are hidden throughout the world, and uncovering them will enable players to fully realize the story they're entwined in. The player will encounter several different types of puzzles as they explore.

Environmental puzzles will encompass the actual gameplay- they will test the player’s mastery of the movement system, as well as their ability to fight enemies while being thrown a curve-ball by the world around them.

The player sees the entrance to a cave high up a steep cliff face, located in the Quarry, with no way to get to it, except by ascending a series of rocks and vines across precarious ledges. One missed jump, or failing to recover from a vine breaking may send the player plummeting to certain death. Upon reaching the cave, the player enters and sees a weapon resting on a dais in the middle of a perfectly clear pool of water. Luckily for the player, the water happens to be extremely pure and can be used as a craftable resource. This can potentially be used for a healing solution to help the player stay alive- as collecting the weapon could awake an enemy.

"Archeology games" are puzzles that test the player's ability to piece together the lore they uncover, and find out what really happened during the Soulfire Crisis, what came after, and why the world is the way it is today. Some even reveal hints to the location of weapons and augments hidden throughout the world.

The player might be traipsing through the forest, and come upon a rubble strewn clearing. Within a ruined building is a tapestry, depicting a great battle from before the Soulfire Crisis- with several sections missing. In the immediate vicinity, pieces of the tapestry can be found and collected by the player, to make it whole once more. The player must place the pieces in the order in which the events took place. Once the scene has been properly recreated, the tapestry falls, and reveals lore describing the battle chiseled into the wall of the ruins, as well as hinting towards the location of an armor augment hidden elsewhere within the region.