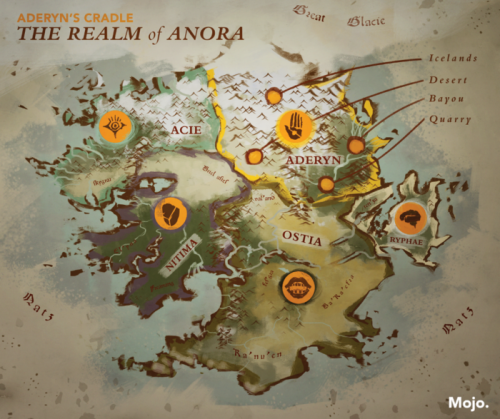 a map of Anora, Nitima's cradle is located below Acie's cradle and besides Ostia's cradle.

Nitima, the Goddess of Passion, is one of the five gods of Anora. She is represented by fire.

Most passionate of the five, Nitima thrives on the trials and tribulations of humans. Finding despair, anger, and love to be most potent, Nitima urged its followers to war, waging battles both witnin and without Nitima's cradle. In time, disciples of Nitima became known as fiercely driven warriors, and even fiercer lovers.

Devoid of most emotion, Nitima "feels" through its followers. It is born of Fire energy, embodying the passions and physical energies of human beings, from long-lasting, low-burning embers (the energetic "hum" of spiritual zen) to dramatic, engulfing flares (explosions of change). Being the most manipulative god, it is capable of appearing to its followers in a myriad of forms, and subsequently is the only genderless god. The everyday emotions it receives through its followers are enough to sustain it, but it truly thrives on extreme emotions like rage, love, envy, etc.

Nitima's traditional region is situated near the coast, and its followers are made up of a sort of feudal system of warring clans, who occasionally unite to expand their borders. Some clans, unable to maintain a holding, wander the steppes near the coast, and perform raids on the borders, becoming known as "barbarians".
Ocasionally, a feudal lord could gain enough power to expand their borders, but the nature of Nitima's followers undermines the system, and the empires collapse and retreat back to their original borders or the initial armies get absorbed into the places they conquered. Nitima cares little for this, so long as its lust is fulfilled.
Many among Nitima's people are polygamists. The culture is extremely social, and short-lived vendettas often erupt between clans. In time, disciples of Nitima became known as fiercely driven warriors, and even more aggressive lovers. What we would call "extreme bipolar disorder" is known as Nitima's Blessing within the religion, and Nitima's Curse to outsiders.