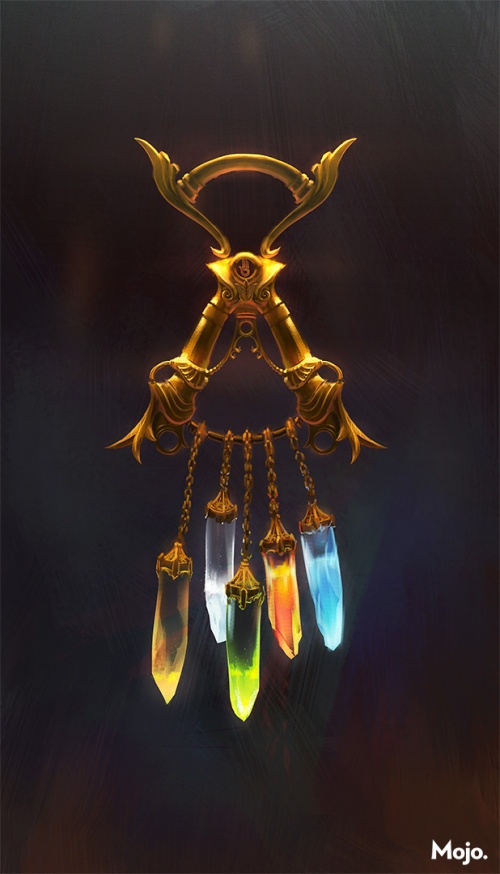 Mana in Aderyn's Cradle is the lifeblood of the land. It serves as a connection between the Gods and nature and acts as a resource of magic for the players to power the augments to their weapons. The containers used to store and gather the mana can be upgraded through using this mana and finding their upgrade components.

There are 5 types of mana which are representative of the forces of the world; light, water, stone, fire, and life.

In physical form, mana is a crystalline structure that appears to be bleeding from the environment and is found in varying concentrations across Cradle. Mana is used to both place weapon augments onto weapons and to power those weapon augments once they are in place. To collect mana, the player has five crystals, each representative of a different type of mana which together form a charm that the player can holdout, given a certain proximity and directionality of the mana, to collect. The amount of mana that you can collect in each of these crystals and store at once is capped, however, the capacity of these crystals can be increased through the use of upgrades to the crystals that can be found scattered throughout the environments (3 upgrades max per crystal). To actually apply the upgrade, the upgrade crystal must be fused with the original crystal. Fusion can only occur when the crystal has become unstable which is noted by the change in the intensity of the glow. Destabilization of the crystal occurs through the use of mana to fuel the weapon augments.

The amount of each mana that the player has will be show via two methods:
1. Each Weapon that is augmented by a certain force will have a more or less visually powerful aura that indicates implicitly how much of the mana/mana's that are used by the augmented weapon the player has left.
2. The player has the option of pressing a button to hold out the mana carrier charm as both a lantern and to see how much of each mana they have left. The opacity and glow amount of each crystal indicates the amount of mana.

Life mana bleeding from a tree.

A Note on Spelling[edit | edit source]

In most media, (including the Bible) mana is spelt “manna.” However, the people of Anora arrived at the word on their own, resulting in a false cognate. Although similar in concept and spelling, the mana of Anora is a shortened form of the word “manifestation” since the crystals are the physical forms of primal forces.